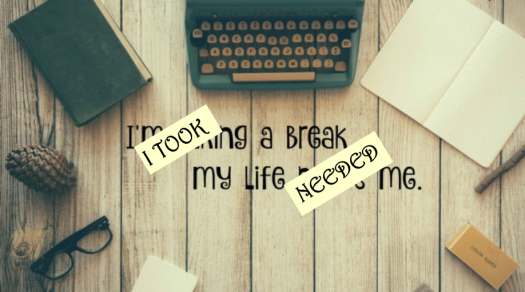 It has been exactly a year ago this month that a life-changing experience rattled my cage and was I thrown for a loop bigger than I’ve ever experienced. I’m not normally needy and I can handle change and losses pretty well.  However, I tend not to recognize when I am hurting enough that I need help, so this was the first time that I finally had to admit that I was dealing with a grief bigger than I could carry.  As a result I chose to take a self-imposed hiatus from blogging a few months later and haven’t shared my heart for nine months now.  I think I’m ready now.

When I finally listened to the Holy Spirit whispering to me that my life needed me – I needed to take care of me – to allow healing and to gain new perspective on all that had taken place around me over the past two years, I hesitated. Taking care of me is not as easy as it sounds, because I’m typically the one taking care of people.  I’m not the one that usually needs taking care of.  But the end of the story is that God, as always, was faithful and walked me down a path of learning and introspection, as well as healing that allows me now to look forward to writing my thoughts down again.  Don’t you love a redemptive story?

What could cause something so crippling to this normally balanced and capable gal?  Did I have a near-death experience?  Was I injured in an accident that required many months of recuperation?  Was I diagnosed with a terminal illness that I would never recover from?  Nope…nothing that dramatic.  And it wasn’t just one thing but a perfect storm of several things that when combined were more than I could carry.  The truth of the matter is that all of the losses I experienced felt like all of those things – the death of something once loved, an injury to my soul, an illness that didn’t seem healable.  This loss was so hurtful that it did require many months of recuperation.  Just one of those losses on it’s own probably wouldn’t have taken a toll on me, but combined with all the others it built up and overflowed into the empty parts of my heart and short-circuited me.

The event that began the crashing down of my safe sanctuary was when my ability to care for others was taken away from me.  Bottom line….I was simply let go from a job in ministry that I loved (the day after my 10 year anniversary) when leadership and I didn’t agree on what grace and ministry should look like.  Yep…I got the ax.  It doesn’t sound that dramatic, does it?  The months leading up to it was very stressful – I felt misunderstood, unheard and uncared for.  My little ol’ head just couldn’t wrap itself around the absurdity of the situation.  It felt like what I imagine a divorce might feel like.

The death of several dear friends before and after the ax added to the loss I felt, but with the job loss there were ripple effects I never saw coming.  I not only lost my job, but I also lost my church.  I lost friends.  I lost relationships.  I lost trust.  I lost truth. And as with any loss, the grief that I had to walk through with those losses was beyond anything I expected.  More, in fact, than the grief I experienced even when my parents died. Throw into the mix my husband losing most of his hearing…the stress of looking for a new job and wondering where I would fit in in such a beautiful way as before…well its enough to send someone to the fridge for a gallon of ice cream in a second.

Looking back at what I wrote right before I was let go, it reflects what I was learning at the time.  Here are some words from one of the last posts I wrote shortly before the big unexpected divorce in August of 2016.  It was about the sanctuary that I found in serving God’s people.  In my job.  In leadership that I had been able to trust in the past.  It was entitled Finding Sanctuary…

So I’m learning new and exciting things about grace and maneuvering through the hard.  Here is what I’m learning in this sanctuary in the midst of the flood:

How’s that for honesty?  Yikes.  A precious friend of this sanctuary said to me recently… “God must love [your sanctuary] SO much that He would allow it to go through this refining”.  So I struggle to be brave in the midst of the hard.  It’s uncomfortable.  I don’t like it.  I don’t understand it….but that’s OK.  It’s not my job to understand.  Once again God is teaching me about trusting Him.  Dang I wish I’d get this trust thing right.

So the truth of the matter is that I really haven’t lost this sanctuary – Christ is in me.  He is my sanctuary, and maybe I was making this one somewhat of an idol.  I dunno.  There’s a lot I don’t know.  All I know is that I’m walking through the hard with the help of the One who sees all and knows all and is walking me through the pain step by step.  So I’m finding new possibilities in this sanctuary.  And maybe new sanctuaries.  Once again, the hard is cloaked in love and grace.

Yowza!  Little did I know how prophetic those words would be. But aren’t church people supposed to get along? Isn’t grace supposed to solve all relational issues? Unfortunately, that’s not always the case. It has to be a two way street.  If I had known what was ahead of me amid the darkness of the journey, I might have ducked under covers to guard myself from the howling winds in self-protection.  For months I found myself lost and I couldn’t find my way back to what I considered the norm.  I thought I must be crazy – did no one else see what I saw?

The journey I walked was typical as with any grief.  First I was content…then angry…then I tried to figure out what I could have done differently.  In the end, I realized that I had found all my value in caring for people, and not finding my value in Christ’s love for me just as I was.  I didn’t have to be serving others to be worthy.  I always knew that on paper…but hadn’t learned the lesson personally.  But as always, God is faithful and has redeemed me also in a way that I never could have expected.

In trying to put to words what I’ve walked through and away with…as small as it seems this quote by Brennan Manning best describes what I learned:

“… in the end, my sin will never outweigh God’s love. That the Prodigal can never outrun the Father. That I am not measured by the good I do but by the grace I accept. That being lost is a prerequisite to being found. That living a life of faith is not lived in the light, it is discovered in the dark. That not being a saint here on earth will not necessarily keep you from being in that number when the march begins.”

The final chapter of the story maybe hasn’t been written yet, but I will tell you God has placed me back in ministsry under a wonderful umbrella of Grace.  In a City of Grace.  I’m doing a combination of all the things God has gifted me with, doing lots of new creative things, and loving where He has me.  There are still losses – I don’t see friends I use to and that makes me sad.  People and places and faces change.  That’s a loss too, but I’m learning that its normal and I’m OK with that.  I think God knew what He was doing when he scattered so many people from the covering of our sanctuary to go out and serve in other places.  That might just have been His plan all along.