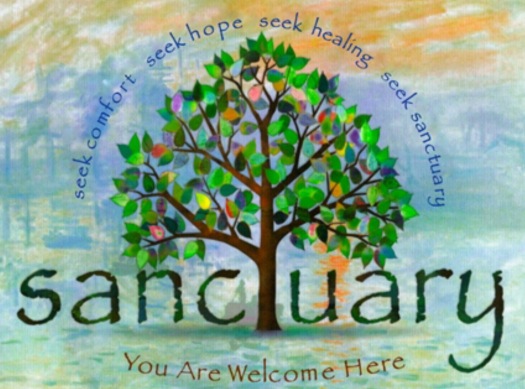 When I first started this blog the title was Losing Sanctuary.  One of the definitions listed in the dictionary under “sanctuary”reads,

“A place where wildlife, especially those hunted for sport,
can take refuge and grow in safety from hunters”.

I have several sanctuaries.  One is my home.  I love my home,  simply because it’s so homey.  Another is my shower – that borders on TMI but I have some of my best conversations with God in there.  Another is my car.  My car is like my prayer closet.  Your sanctuary might be a friend, or maybe your marriage.  Your sanctuary might even be your children.  It could be a place – like the ocean or the mountains – wherever you might run for renewal.

One of my favorite sanctuaries is where I first observed grace in real life.  It was offered to me and many others like me. I was given immunity from who I really was; loved and well cared for despite my wobbly faith. I reveled in my first taste of grace and grew in its sweet balm, and I watched others do the same.  We still wobbled now and then, but my sanctuary and its people would come alongside and lift us up, offering us the encouragement we needed to live in the righteousness already in us, based on who we carried with us  – not the punishment we were entitled to.  It was there that I learned to listen for the dove’s voice.

And then it happened.  This strong sanctuary that I thought would withstand any strong wind was hit by a doozy – a storm bigger than I had ever experienced in my safe little world.  Could the foundation of grace within us hold this sanctuary together?  My naivety thought it would because I thought this sanctuary was immune to the divisiveness that can hide a coming storm.

The tricky part was that it was hard to recognize the storm at first.  It came disguised in little droplets of rain that wouldn’t arose anyone’s suspicions.  The caretaker moved on to care for another sanctuary and ours was soon wearing different shoes and caring for the sanctuary in foreign ways.  A change was made here.  A new sign there.  Doors were locked that we were use to walking through.  A nifty new emblem was designed to remind us that we were no longer who we were.  Changes that, in of themselves might not rattle the windows.  Soon an air of secrecy seeped in.

It’s hard to discern the line between different and messy.  I’m really OK with different – I actually do pretty well with change.  It’s good for you to change things up now and then. But before we knew it the winds howled and the shutters slammed against the sanctuary, and soon it seemed way beyond different.  Waters soon began leaking into the safe walls of the sanctuary and began to flood it’s foundation.

What I’ve learned is that the best environment for great accomplishment is an environment of trust, safety, and authenticity.  If you try to accomplish anything outside of that kind of environment, you will fail miserably and miss the authenticity of relationship that is needed to remember why you do what you do in the first place.  Then you go from a sanctuary of grace to a sanctuary of law, rules and regulations.

How the heck did this happen?  How could God allow this? I mean really….if sanctuary is where He is, how could He allow this to happen?  I was certain that God had been the center of this sanctuary, so would He not protect my place of refuge and grace?  Surely He would protect this sanctuary from this calamity, and come to our aid!

But He didn’t.  He sat on His hands and allowed pain and suffering to refine us.  Soon there were reactions, hurt feelings, then a spirit of mistrust fell over the sanctuary.  Hearts were broken, including mine.  Friends left the sanctuary to find a safer place, and I fought against the losses with all I had in me.  Did I play any part in this hard?  I wanted to fix it and seek justice, but a wise man once told me not to fight other people’s battles.  So I withdrew and tried to continue to pursue the grace that I knew had to still be there…somewhere hidden beneath the floorboards.  I became emotionally and spiritually stuck.

I ended up getting lost in what the sanctuary had been, and not what God might be doing to make it better.  I focused on the place and it kept me from remembering who I was in Christ – who was actually in me. And I started to believe that if I were more spiritually diligent and devoted, then I’d feel OK about the sanctuary.  I did and it didn’t help.  I felt the flood waters rising.  But God, as He always does, met me in my pain.  He whispered to me that I would never find sanctuary in anything apart from Him.  Big giant duh!

So I’m learning new and exciting things about grace and maneuvering through the hard.  Here is what I’m learning in this sanctuary in the midst of the flood:

How’s that for honesty?  Yikes.  A precious friend of this sanctuary said to me recently… “God must love [your sanctuary] SO much that He would allow it to go through this refining”.  So I struggle to be brave in the midst of the hard.  It’s uncomfortable.  I don’t like it.  I don’t understand it….but that’s OK.  It’s not my job to understand.  Once again God is teaching me about trusting Him.  Dang I wish I’d get this trust thing right.

So the truth of the matter is that I really haven’t lost this sanctuary – Christ is in me.  He is my sanctuary, and maybe I was making this one somewhat of an idol.  I dunno.  There’s a lot I don’t know.  All I know is that I’m walking through the hard with the help of the One who sees all and knows all and is walking me through the pain step by step.  So I’m finding new possibilities in this sanctuary.  And maybe new sanctuaries.

Once again, the hard is cloaked in love and grace.